From Guernsey to home

Well I intended to blog while I was away and that started well but, as always I got caught up and decided that Facebook was easier while on the move.

So, to give a taste of the six weeks away I will summarise: Jersey was interesting, beautiful in its way but very different to Guernsey and quite expensive. After all, it is a tax haven and lots of bankers, accountants and lawyers abound. We stayed at a great hotel, the Greenhills Country Hotel and I would have liked to relax there for a longer stay.

After Jersey, the tour went to St Malo in the north of France - Brittany - an interesting town with great seafood, particularly oysters. On the way to St Malo, we visited a megalithic site at Dinan, very interesting as it is located in an oak grove and the Druids celebrate their rituals at the site. 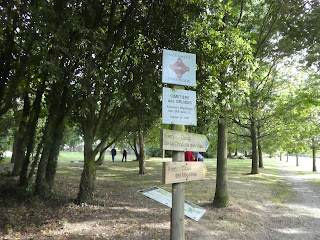 We went for a day trip to Mon St Michel, a site that I had long wanted to visit. The day was perfect, not a cloud in the bright blue sky but perishingly cold. I was unable to manage the climb to the top of the mount but enjoyed part of the way up and some fabulous fish soup.


Finishing off my trip to Brittany, we went to Chartres Cathedral, another place I always wanted to visit. Thankfully it was mercifully fairly free of tourists, and I could wander in the silence and absorb the gothic beauty.


Then off to Paris and the Eurostar to London. Down to Somerset and the village of Lopen where my Thomas family lived and died. They were all baptised, married and buried at the All Saints Church, Lopen. It was wonderful to sit in the church and know that generations of my family had sat there and worshipped. From the film of the vestry minutes, I know that Jonas Thomas, my 4th great grandfather and his son James (both master carpenters) repaired pews, built fences, repaired the roof, relocated the choir and more. As they were poor they didn't have headstones but sitting in the churchyard on a peaceful sunny day I felt them very near.
From Somerset, I went to York and then up to Scotland near Inverness to visit Fort George and the Highlanders Museum. This had particular significance for me as my 2nd great grandfather, Dugald Cameron, served in the 79th Regiment of the Foot (Cameronian Volunteers, later the Cameron Highlanders) as a drummer from its inception on the 17th August1793. You can read more about the Highlanders here.
After Fort George, I drove west to the Highlands and the ancestral home of my Cameron family. They lived near Fort William, also on the ARnamuchan Peninsula and worshipped in the village of Acharacle.
After the Highlands, I drove down to Glasgow through Glencoe. Glencoe is a forbidding place with high mountains and rocks - read about the massacre here. While driving through the Glen, two RAF jets came swooping down at great speed and frightened the daylights out of me apparently they use the glens for practice.
I flew from Glasgow to Belfast with EasyJet and was pleasantly surprised. I expected to be charged for luggage and I wasn't, I received assistance on and off the plane and the crew were fabulous - no problems at all. In Belfast, I took the city tour bus and was fascinated with the murals in the Falls Road and the Shankill. While I was there a man was murdered in his house in West Belfast by paramilitaries - it seems nothing much has changed. I caught the train from Belfast to Dublin for the Back to Our Past expo. I attended for two days and was fascinated to catch up with people I had met in Ennis. The Genetic Genealogy lectures were a bonus.

After Dublin, I drove to Derry where my Connor family came from. It was fascinating to visit the village of Ballykelly and the townland of Moyes nearby. I also met with Brian Mit6chell from Derry Genealogy and had a lovely three-hour chat. Unfortunately, I caught up with people just before I left and had so little time with them. A good excuse to return in 2017!


So off to Dublin and home via two nights in Dubai with Emirates. I didn't enjoy Dubai though the hotel, the Radisson Blu on Deira Creek was fabulous. Dubai is too artificial and flashy for my liking.

Home on the 2nd November and pleased to arrive - there is nothing like travelling but home is best - particularly your own bed and pillows.
Posted by Helen Connor at 16:14

Helen Connor
Brisbane, Queensland, Australia
While not an expert by any means in gardening I do enjoy pottering in the garden. I live in an apartment and have a courtyard garden. My apartment backs on to a park so I have the enjoyment of the trees in the park over my fence.

"We are the children of many sires, and every drop of blood in us in its turn ... betrays its ancestor."
Ralph Waldo Emerson